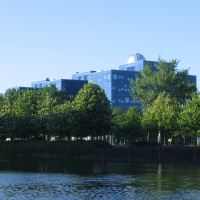 The 2008 Web Services Challenge was held in Washington, D.C., USA on July 23rd during the 2008 Joint IEEE Conference on E-Commerce (CEC'08) and Enterprise Computing, E-Commerce and E-Services (EEE'08). The challenge, in its fourth edition, evaluates systems composing higher-level functionality from large repositories of web-based applications (Web Services) according to user requests and semantic service information. All systems were tested against several sets of services with a size of up to tens of thousands services.

The University of Groningen participated this year with a team of four people: master student Nico van Benthem, bachelor student Jaap Bresser, PhD student Elie el Khoury, under the supervision of Marco Aiello from the Computer Science department. The team was awarded in both prize categories: first place for their system architecture and first runner up for the performance of their system.

The competition was strong with eight university teams participating from the USA, China, Canada, Germany and The Netherlands. Although the University of Groningen was one of the two teams that never participated before, it was the only team awarded in both the Architecture and in the Performances categories.

Press coverage of the team’s participation.