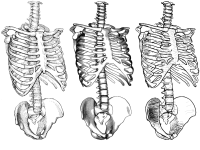 We combine techniques from computer graphics, visualization, and interactive systems and get inspiration from centuries of traditional illustration. This non-photorealistic rendering breaks free from the traditional (photo-)realism and generates images or animations that use abstraction, exaggeration, and stylization. This increases the freedom of expression and, thus, has great potential for visualization and illustration.

The additional illustrative visualization of the surface of the brain and skull adds context to DTI fiber tract depictions.

We apply NPR techniques to illustration and visualization problems in medical, technical, and other domains. We also combine NPR methods with other rendering techniques to create hybrid rendering styles for illustration and visualization. We also have a strong interest in comparing computer-generated non-photorealistic renditions with professionally created hand-drawn illustrations. The surprising result of a recent study was that people could, in general, distinguish the two types of images but still liked both categories. They enjoyed the hand-drawn for their character and the computer-generated for their precision and three-dimensional appearance.

For details on these and other projects please look at the links on the bar on the left.