The group has access to various visualization and virtual reality facilities, which are either in-house or hosted by the Centre for High Performance Computing and Visualisation (HPC/V) of the Donald Smits Center for Information Technology of our university. 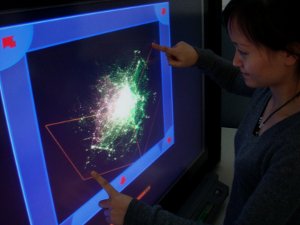 The approximately 10m by 2.8m large Reality Theatre wall (see below) has recently been equipped with multi-touch input and can be used for student and research projects: 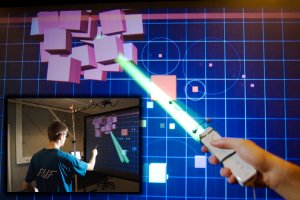 The mobile 3D system consists of an advanced graphics workstation, a special polarization-preserving projection screen, and a dual projector setup. This passive stereo system was co-financed by the group and the Centre for High Performance Computing and Visualisation.

From April 14 to May 9 of the year 2007, a group of 25 students in (Applied) Physics, Mathematics, Computer Science and Astronomy together with two members of the scientific staff of the University of Groningen visited South Korea and Taiwan. Orange Tigers '07 is the committee which organized the study tour. The committee is part of the foundation Grote Buitenlandse Excursie(s) - Fysisch-Mathematische Faculteitsvereniging (GBE-FMF). The aim of this tour was to give the participants an overview of the Taiwanese and South Korean society. To achieve this, a number of scientific institutes and cultural phenomena were visited. One of the companies the group visited in South Korea was Dimen. Dimen is a small company located in Incheon, South Korea, which develops 3D LCD screens. Their goal is to make the best 3D experience on a flat screen without the use of special glasses or the like. As a token of their appreciation of our visit, Dimen presented a C190S stereoscopic display as a gift to the University of Groningen for research purposes.

The display allows users to see stereoscopic images without wearing special glasses, such as shutter or polarized glasses. The screen makes use of a parallax barrier, which separates the light pathway of spatial images into images for left and right eyes. The display acceps various stereo imaging formats, and can be driven by standard PC graphics cards (also ones that do not support stereo natively). The Reality Cube is an advanced virtual reality system in which up to five people can be immersed into a 3D world. The Reality Cube gives the users a very strong feeling of presence: it means not just looking at a 3D world but being surrounded by it. The Reality Theatre is a large stereoscopic projection system (10 meters wide), which is suitable for 3D presentations for groups up to 25 people. Both systems are hosted by the Centre for High Performance Computing and Visualisation.