Segmenting lesions from surrounding skin in dermoscopic images is the first, and most critical, required step for further (semi)automatic image analysis. However, small-scale image artifacts such as noise or occluding hairs adversely impair the performance and quality of many existing image segmentation techniques.

To alleviate the above problems, we propose a new method for image segmentation. Key to this method is the observation that, for many existing segmentation methods, impairing artifacts come as small-scale noise or gaps that overlap with, or protrude into, the region to segment. To faithfully segment the image in presence of such artifacts, we need thus to classify gaps as

We want to automatically detect and keep true-positives, and in the same time detect and eliminate false-positives.

The proposed method consists of a combination of morphological image-processing operations, as follows:

The use of the medial axis S allows us, thus, to effectively detect deep gaps protruding into the shape (such as created by hairs), while at the same time keep fine gap-details pertaining to the shape's boundary.

The figure below compares, for additional clarity, classical threshold-based segmentation (still frequently used by many imaging tools) with our method. As visible, our results are significantly less influenced by noise and/or occluding artifacts. 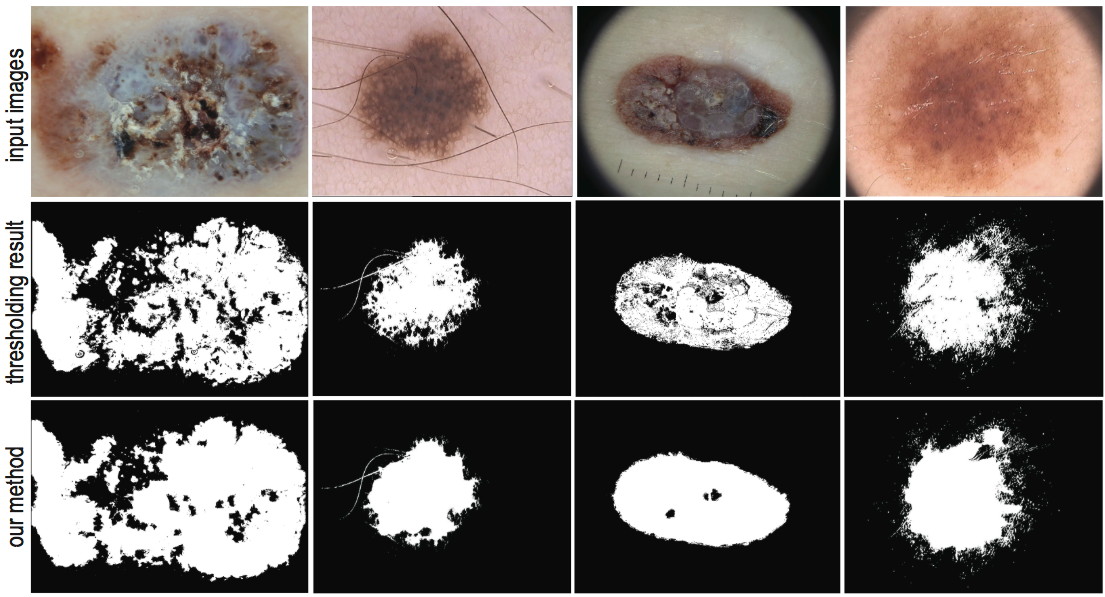 In addition to image segmentation, we can use our method to digitally remove occluding artifacts such as hairs. These artifacts are automatically detected as being gaps that significantly protrude in the lesion area. Once found, we remove gaps by using a classical image inpainting method.

The image below shows the results of our digital hair removal (DHR) on a highly challenging skin image having considerable occlusions created by hair of various density, tint, and thickness. We compared out method with the well-known DullRazor DHR technique [Lee et al., 1997]. As visible, our method succeeds in removing considerably more hair than DullRazor. 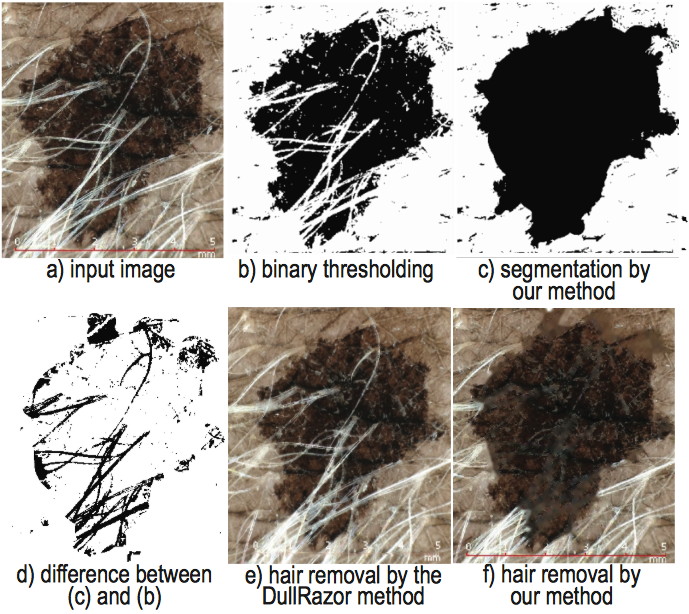 Our gap-detection method is implemented atop of the dense-skeleton image representation using our CUDA-based salience skeleton implementation. The method can process Handyscope images at full resolution in a few seconds on a MacBook Pro with a Nvidia 330 GTM graphics card.