The Target holding is a multi-organization venture focused on the processing of very large amounts of data (petabytes) acquired from sensors, such as CCD. Data processing tasks involve several of the following steps:

The Target software infrastructure consists of a large set of data processing tools, databases, and platforms, all connected in a distributed architecture. Given the complexity of this architecture, it is currently quite hard for developers to extend or modify the existing processing pipeline.

In this project, we study the feasibility of a visual modeling solution to support the above use-case. Ideally, such a solution should

Visual programming is a possible solution to be investigated for this project. Visual programming offers graphical representations of processing units to end-users and allows these to interactively assemble units to construct computational pipelines. The image below shows a snapshot from such a visual programming environment. 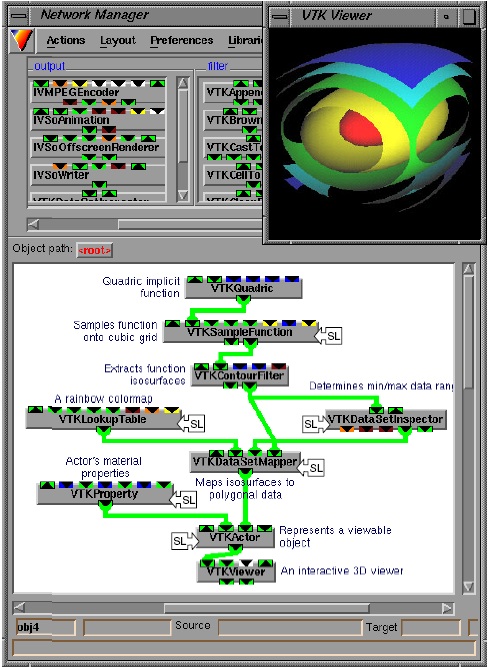 Although many such visual programming environments exist, several specific challenges exist in the current project

The project will cover the following steps:

The various building blocks of the architecture proposed above are identified and implemented. The solution is tested with a simple proof-of-concept application running on the actual Target systems and using the actual Target data sources.

The existing computational software blocks in the Target environment are incorporated in the current solution. In parallel, existing Target applications are re-built and tested using the new solution. This step may be covered minimally if the project is done by a single student.

The candidate(s) for this project should ideally have

The project will be evaluated as follows

The project can be done by a single student or two students. If done by two students, then

This project is supervised by prof. Alexandru Telea.

From the Target holding, the project is supervised by Rolf Fokkens (Rolf.fokkens@target-­holding.nl)