In this assignment, you will have to design and develop a tool that is able to analyze the evolution of source-code dependencies from a given software repository. The idea of such a tool is simple: Given a repository containing source code, the user of the tool would like to:

NOTE: Given the complexity of this assignment, it is recommended that you do it

The steps of the assignment are described below.

In this step, you will develop infrastructure to collect the software data from which you next extract the dependencies. For this, you can consider software stored in SVN, Git, or TFS repositories.

To access a repository and get information on the number of stored revisions, the files modified in each revision, and getting the actual files, you can use existing third-party tools:

For the start, you can just manually download a single revision from your repository of choice, and proceed to step 2.

The aim of this step is to set up a dependency extractor This is a tool which is able to generate software dependencies from an already downloaded revision (set of files) of a software repository. You have already acquired one version of such a repository in step 1. Now it is time to extract the dependencies. For this, you can use several code analysis tools:

You now have the dependencies already extracted from step 2. The question is now: how to present these to the user in an insightful, useful way? For this, you can use a graph visualization. Indeed, since the dependencies for a graph, the best way to communicate this to an analyst is to draw that graph.

To construct a graph visualization, you can use the GraphViz. GraphViz is a powerful toolkit that enables users to

GraphViz can be used either as a set of standalone programs, connected via files and command-line options, or as a library via a C API.

When constructing this visualization, you should consider several points (and answer the questions below in your report):

All in all, do not try to directly visualize a graph larger than a few hundreds of nodes and/or edges, since this will almost surely lead to a cluttered image.

Each layout produces a different type of drawing, and also is best for another type of graph. dot and twopi are quite good for directed graphs with few cycles. dot produces sometimes more understandable pictures, given the strict ordering of nodes in layers. However, twopi produces more compact pictures. neato is better for general, strongly-connected, graphs with cycles, but can take a long time to run and produces cluttered results on large graphs.

After choosing the layout, the second question is how to draw the nodes and edges. For nodes, the main choices are shape, size, and color. For edges, the main choices are color and possibly thickness. Use these graphical attributes to show data attributes of your dependency graph. For example, you can use color and shape to show the types of entities and/or relations. You could use size to emphasize the more important entities in your system, e.g. those having the largest number of connected incoming and/or outgoing edges. Also, you can use color, size, and shape to show how dependencies change in time.

As a general advice, do not overdo the graphics with too many annotations. Graphs can easily become too cluttered, especially if densely connected, so the best thing to do here is to stay minimal.

The figures below give you an idea of the type of result to expect. These are dependency graphs extracted and visualized from real-world software systems using pretty much the same kind of tools as the ones you shall use. 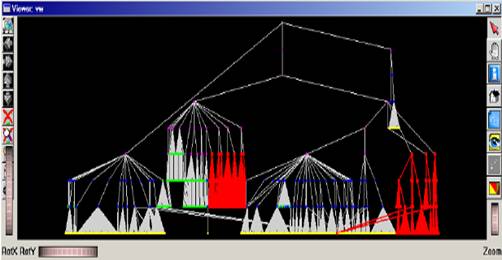 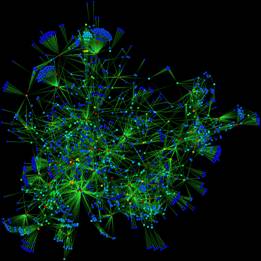 (neato layout of a call graph) 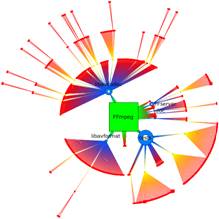 Besides GraphViz, you can also visualize dependency graphs using SolidSX. In contrast to GraphViz, SolidSX is a fully integrated interactive graph-exploration tool that offers much higher scalability and user interaction to navigate large graphs and produces views having little clutter. However, SolidSX does not offer the low-level customization possibilities that GraphViz does. SolidSX is only available for the .NET platform. In contrast, GraphViz is portable to all major operating systems.

Step 4: Putting it all together

The aim of this step is to assemble all software components you have used and/or designed in the previous three steps (software source code acquisition, extraction of dependencies, visualization) in a coherent, easy-to-use tool. The aim of this step is not to produce a highly polished, end-user tool, however. It is to produce a demonstrator that the person assessing your work can easily run offline, i.e. not in your presence, in order to reproduce the results.

For this step, you can use different methods. Think of mainly of scripting of several operations, implemented as standalone executables, into a ‘scenario’ application. Alternatively, you can bundle all the developed components into a single tool controlled by a GUI. However, the actual solution is left at your choice.

To complete this assignment, you have to deliver

An earlier (good) example of this assignment being completed by former students, including both binaries and source code, is available here. Feel free to study it and borrow ideas, third-party libraries, and designs.