Often, we can find program problems only by comparing two or more different traces. Finding our the differences between such traces helps highlighting potential problem causes, and also locate the code areas and/or data values responsible for such problems. However, this is not trivial to do for traces consisting of millions of elements (e.g. function invocations)

We have developed a visual data mining and analysis tool for the scalable comparison of program traces. Our tool has the following main features

The image below illustrates the main features of our TraceDiff tool. Users can select two or more traces to compare (left window); next, time-ranges of significant execution differences are automatically highlighted (overview); selecting such a range shows a multiscale comparison of the two traces executions in the main comparison window. 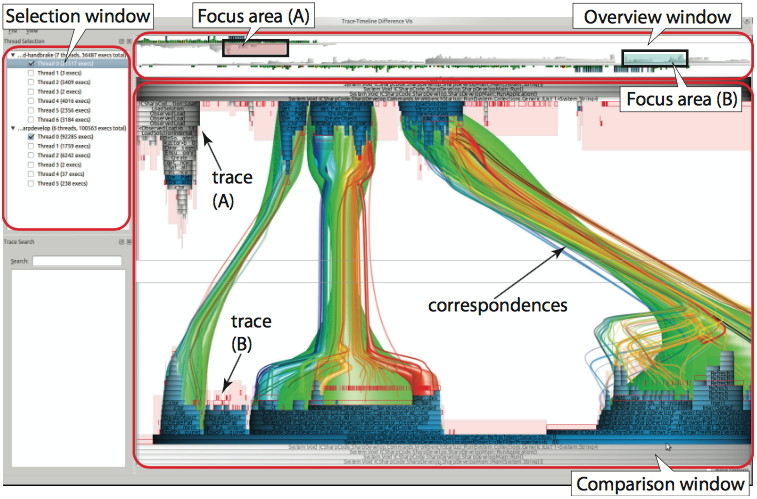 To compare traces, we developed an extended correspondence-based bundling algorithm, that is able to show both coarse-scale correspondences (matches) but also fine-scale matches in context. Our algorithm uses an extension of the classical shaded tubes? method we developed earlier for multiscale compound-graph visualization. The figure below illustrates our design. 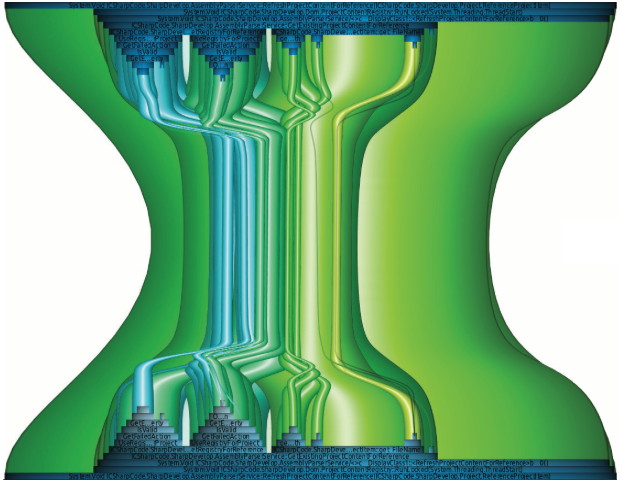 Atop of correspondences, several metrics can be mapped by color-coding, e.g. similarity or temporal order. This allows easily identifying outliers in near-similar trace sequences, as shown in the figure below. 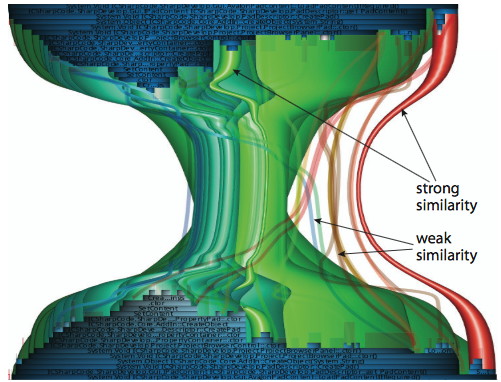 We used our TraceDiff tool to find execution-trace differences for software systems ranging up to over 1M lines-of-code and 1K function calls. For instance, running such a system with similar inputs, and next finding trace differences, allowed us spotting anomalous execution divergences which, in the end, indicate program problems (bugs or suboptimal code). The figure below shows a snapshot from such a large-program trace comparison. Color encodes function call moments. Shifts in the blue-to-red color gradient indicate permutations in the function-call order, which in turn indicate execution problems.

The TraceDiff correspondence algorithm is further maintained and used by the SoftwareDiagnostics company.

See also the talk on multiscale visualization of A. Telea delivered at HPI, Potsdam, Germany, in Feb. 2012.